Edible Cannabis in MN and your Gun Rights 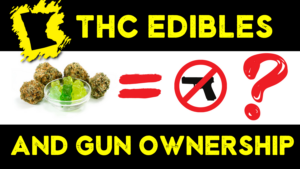 In short:  There is no impact on your Second Amendment rights under state & federal law if you choose to consume edible cannabis products that fall under Minnesota’s new law as of July 2022.

For more details, read on below.

The short answer is: as long as the edibles are manufactured in a manner consistent with state and federal laws, there is no legal restriction on your right to possess a firearm by consuming edibles in Minnesota.

THC that is produced in this manner is NOT considered a “controlled substance” under state or federal law.

Since edible products legally sold and permitted in Minnesota contain less than .3% of delta-9 THC (that are naturally derived from hemp) they are NOT a controlled substance under federal law, they do not impact your right to bear arms.

In Minnesota, you cannot operate a motor vehicle or carry a firearm if you are “intoxicated” by ANY substance “when introduced into the human body impairs the central nervous system or impairs the human audio, visual, or mental processes.” (MN 169A.03).

This is a subjective determination that can be made by law enforcement with no need for chemical testing.

We STRONGLY recommend that you do not carry a firearm or operate a motor vehicle while under the influence of any THC products.

Use of any “controlled substance” is a prohibiting factor for firearm possession at a federal level if the person is “is an unlawful user of or addicted to any controlled substance (as defined in section 102 of the Controlled Substances Act ” (18 U.S. Code § 922)

This section is not applicable to the recent law passed in Minnesota, because under federal law, “hemp” is NOT a “controlled substance” (21 U.S. Code § 802).  This was changed in 2018 as a part of the 2018 Agricultural Improvement Act (aka the 2018 Farm Bill), passed by the United States Congress and signed into law by then-President Trump. As an additional reference, here’s a letter from the DEA to the State of Alabama confirming this point.

“Hemp” is defined as “the plant Cannabis sativa L. and any part of that plant, including the seeds thereof and all derivatives, extracts, cannabinoids, isomers, acids, salts, and salts of isomers, whether growing or not, with a delta-9 tetrahydrocannabinol concentration of not more than 0.3 percent on a dry weight basis.” (7 U.S. Code § 1639o)

If you have filled out a Form 4473 to purchase a firearm, you may have noticed that your compliance with this law is asked, along with a disclaimer about state legalization:

“The use or possession of marijuana remains unlawful under Federal law regardless of whether it has been legalized or decriminalized for medicinal or recreational purposes in the state where you reside.”

As 21 U.S. Code § 802 establishes that “hemp” is NOT a “marijuana” or a “controlled substance”, the usage of hemp that meets the criteria of 7 U.S. Code § 1639o (as the Minnesota law does) is not a prohibiting factor from possessing or carrying a firearm.

This information is posted for informational purposes and should not be construed as legal advice.