Both candidates submitted a legislative candidate survey to our organization and both candidates received an “A” from us – they both have a 100% voting record on Second Amendment issues during their respective times holding the legislative seat.

In order to receive an “A” from our organization, a candidate must submit a survey that aligns with our stated positions on all Second Amendment issues, including both Constitutional Carry and Stand your Ground.

Both candidates did so – earning the “A” grade.

In early July 2022, both candidates attended a debate where they were asked a question about firearms regulation, we’ve included the full video of this question & the back and forth from both candidates here for your review.

Following the debate, we received several emails and phone calls about former Rep. Loonan’s answer where he states that “I don’t support the Constitutional Carry bill the way it is written right now.”

To clarify Mr. Loonan’s position, we asked him directly about the specific Constitutional Carry bill in the Minnesota House this past legislative session in which we worked with Rep. Lucero to introduce – HF212.

Here is the email from Caucus Chair Bryan Strawser to Mr. Loonan inquiring about the debate. 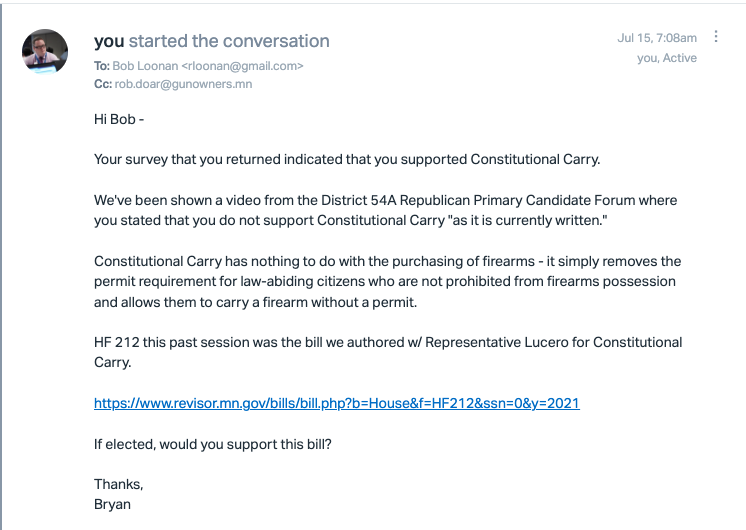 Here is Mr. Loonan’s reply where he states he supports House File 212 and would support Constitutional Carry.

Based on Mr. Loonan’s clarification that he would support HF212 (Constitutional Carry), we will not be changing his grade – both candidates will remain at “A”.

The MN Gun Owners Caucus and PAC have not endorsed a candidate in this race and will not do so prior to the resolution of the primary.